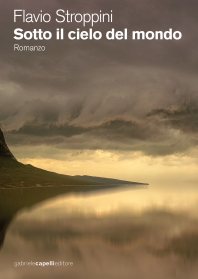 Alvaro Giacometti has always lived a quiet, secure life in the mountain village of his childhood. One day he hears about the death of his father, whom he has not seen in decades: apparently, the man who left him to sail the seas had returned some time before, and came to live not far away from Alvaro’s village. The son decides to go and visit his late father’s house, only to find the huge model of a cargo ship – twelve meters of iron and shipyard material.
What is the meaning of that?
Alvaro has no choice: he needs to put together the pieces of his father’s past, one step after the other. He finds a clue that leads him to Gdansk – the first of the many harbours that he will wander through in his adventurous travel.

Flavio Stroppini has authored the novels Kubi goal!, Pellegrino di cemento, Niente salvia a maggio, and I cani (“Kubi goal!”, “The Concrete Pilgrims”, “No sage in May”, “The Dogs”), as well as a collection of short stories (Scarafaggi, “Cockroaches”) and three books of poetry: Lo Strahler, Assemblaggio informazioni verosimili quotidiane, Bar Macello (“The Strahler”, “Assembling everyday likely information”, “Slaughterhouse Café”). Stroppini features in a number of anthologies: Gotthard, Landscape, Myths and Technology (Scheidegger & Spiess), Chi sono io? Chi altro c’è lì?, and Lonely Planet’s Come diventare scrittore di viaggio (“Who am I? Who else is there?”, “How to become a travel writer”).
For years he has been writing and directing radio dramas for the RSI, the Italian Swiss Radio and Television. In 2017 he directed the project Fabula, where the 2,600-year history of an Alpine valley was told through 50 radio dramas. In 2018 Stroppini’s radio drama Essere o… (“To be or…”) was selected to represent Switzerland at the prestigious Prix Italia. He is the author of the theatre pieces Il viaggio di Arnold, Prossima fermata Bellinzona, Kubi (featuring Amanda Sandrelli) and Tell (“Arnold’s voyage”, “Next stop: Bellinzona”, “Kubi”, and “Tell”).
In 2018 Stroppini signed the walking-theatre project Sì, Rivoluzione! (“Yes! Revolution!”): a performance that saw the participation of several artists, celebrating the centenary of the 1918 Swiss General Strike.
He is a prolific author of reportages, published in various newspapers and magazines. His screenplays have been presented at several international festivals and broadcast on television all over the world. In 2009 Stroppini’s documentary about the war in the Balkans, Custodi di guerra (“War Guardians”), was selected by the International Committee of the Red Cross to represent the Geneva Conventions. In the same year, the video clip The Race, Heavenly States, aired at the Grammy Awards on the CBS, earned him the Screenplay award at the Lincoln Rising Stars Competition. In 2012 he co-authored the RSI short movie Questo è mio! (“This is mine!”), directed by Erik Bernasconi, and celebrating the 300th anniversary of the birth of Jean-Jacques Rousseau.
Stroppini teaches Narration of Reality at the Scuola Holden of Storytelling & Performing Arts in Turin and at the Master of Creative Development and Management of Cultural Activities at the Cà Foscari University in Venice.
He has held readings and lectures in Switzerland, Italy, France, Germany, the USA, China, Iran, India and Tunisia. His work has earned him the participation as the Swiss representative at the “Week of the Italian Language” in Mumbai, Tehran, Tunis, Washington DC, Guangzhou, Shanghai, Beijing and Hong Kong.